CCA South Carolina is a resource first, science based, angler advocate grass-roots organization dedicated to the wise management and sustainable use of the Palmetto State’s marine resources

CCA conserves, protects, and enhances the present and future availability of our coastal resources for the benefit of the general public

Coastal Conservation Association (CCA) is an organization of strong state chapters comprised of avid recreational fishermen who have banded together to address conservation issues nationally and within their respective states.

The outdoor sports enthusiasts and conservationists who make up the organization recognize that only a concerted, on-going effort of major proportions will save the natural resources of our coastal waters from certain depletion or destruction. They are dedicated to preventing that from happening through programs of education, legislation and restoration.

The group had its beginning in 1977 in Texas, where CCA Texas was formed by concerned anglers who were alarmed by declining fish populations. They were made painfully aware of the inherent dangers brought on by dramatically increased commercial fishing pressure and from growing numbers of recreational anglers.

CCA swept across the Gulf States in eight years: First to Alabama (1982) and Louisiana (1984), then to Mississippi and Florida (1985). The Atlantic coast presence of CCA Florida meant a surge up the east coast, where CCA chapters were formed in South Carolina (1986), Georgia (1987), Virginia and North Carolina (1989).

CCA SC’s Topwater Action Campaign was launched in the spring of 2009 and is dedicated exclusively to the creation and restoration of marine habitat in areas that can be accessed and enjoyed by recreational anglers.

Projects include identifying and creating oyster shell recycling sites throughout the state, working collaboratively with DNR’s SCORE team to build oyster restoration sites and the sinking of artificial reefs along the coast of the Palmetto State. 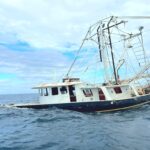