“These projects represent an ever expanding vision for CCA SC concerning projects and partnerships that improve both fisheries habitat and recreational angling opportunities in South Carolina,” said Gary Keisler, CCA SC’s Topwater Action Campaign coordinator. “From nearshore efforts focusing on water quality and estuarine habitat to scientific studies and monitoring of offshore habitat, CCA SC and our partners are working to enhance our coastal resources.”

All three of the projects will be placed at the same general depth but at different locations along the coastline. Deep-water reefs of this nature will benefit species ranging from the snapper-grouper complex to highly migratory species, providing a wide abundance of fish and marine life and making it a true destination for recreational anglers. The next deployment will be off the coast of Georgetown with another 100-foot tug and is simply awaiting favorable weather conditions. Later in the year, a final project will take place with a deployment of similar material off the coast of Beaufort/Hilton Head. These projects represent an approximate $300,000 investment by the partners.

According to former crew members, the General Oglethorpe was originally commissioned on the Great Lakes as an ice breaker and was an active participant in the search for the famous Edmund Fitzgerald until called off the search due to weather conditions that evening. From there, the tug made its way to the West Coast and later to the East Coast where it continued to work on the Savannah River right up to the day the partners stepped in and purchased the vessel.

“These tugboats will make tremendous additions to our artificial reefs, creating productive habitat for fish and anglers, as well as interesting dive sites for divers,” said Bob Martore, SCDNR’s Artificial Reef Coordinator.  “We never would have been able to complete these projects without CCA SC’s assistance.  We’re looking forward to undertaking many more reef-building projects with CCA SC and BCT in the future.” 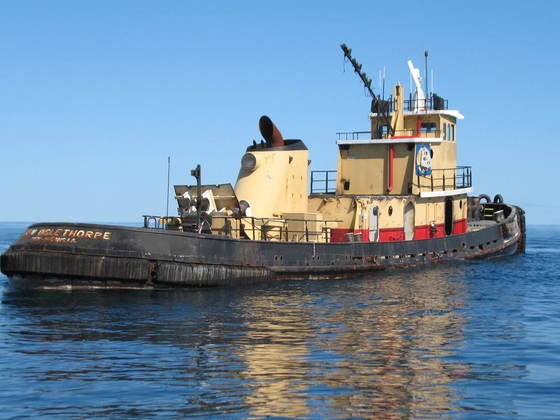