The federal emphasis on commercializing dolphin isn’t new. In 2004, the original fishery management plan for dolphin recognized it as a predominantly recreational fishery and contained a provision for a commercial trip limit of 3,000 pounds, which was specifically designed to prevent a directed commercial fishery from developing. The trip limit provision was taken to public hearing, and a majority of the Council members thought it important enough that they voted in favor of putting the trip limit in place. The NOAA Fisheries Regional Administrator removed the trip limit provision, stating it was unnecessary since longliners weren’t targeting dolphin.

In 2014-15, the commercial sector caught its entire quota of dolphin in the first five months of the year, resulting in a commercial closure from Key West to Maine for the rest of the year. The South Atlantic Fishery Management Council immediately investigated to find out who had caught all the fish so quickly. NOAA Fisheries at the time refused to divulge who had caught the fish, but representatives of the Bluewater Fishermen’s Association (BFA), a commercial fisheries organization, testified at a meeting that dolphin was only a bycatch fishery for longliners, and that they had not targeted them. BFA insisted that state-licensed boats out of North Carolina were responsible for the early closure.

In response, in 2016 the South Atlantic Council again considered a 3,000-pound commercial trip limit, but NOAA Fisheries and commercial fishing representatives opposed the move. In a compromise, it was agreed that the commercial fishery would operate with no trip limits until it hit 75 percent of its quota, and then a 4,500-pound trip limit would be enacted.

In June 2020, South Atlantic Council staff finally refuted BFA’s claims with data that showed that the bluewater longline fleet had indeed targeted and caught more than a million pounds of dolphin in 2014 and 2015, which had resulted in the early closure. Upset at being misled, members of the South Atlantic Council immediately moved to disallow longline gear in the commercial dolphin fishery as part of Dolphin-Wahoo Amendment 10. Facing opposition again from NOAA Fisheries and commercial interests, another proposal was put forth that would exempt commercial boats with a Highly Migratory Species license from the longline ban. That exemption would ultimately protect bluewater longline boats that caused the increased catches and penalize the small-scale, state-licensed boats that had been wrongly blamed for the early closure in 2015.

That is where things stand today. Amendment 10 continues to be debated by the South Atlantic Council, and now is the time for the recreational angling community to demand safeguards be put in place to prevent a directed longline fishery for dolphin from developing once and for all. As an agency dedicated to promoting and subsidizing commercial fisheries, it is clear that NOAA Fisheries intends to ignore the intent of the dolphin fishery management plan and allow a dolphin longline fishery to become established. Nurtured, encouraged and protected by NOAA Fisheries, a directed commercial longline fishery for dolphin will inevitably have a material, negative impact on the quality and availability of this highly prized sportfish that is so crucial to recreational anglers.

The South Atlantic Council next meets Sept. 14-18 and Dolphin-Wahoo Amendment 10 will be on the agenda. Contact your state’s representatives on the Council (https://safmc.net/council-members/) and urge them to protect the future of the dolphin fishery by disallowing commercial longline gear. 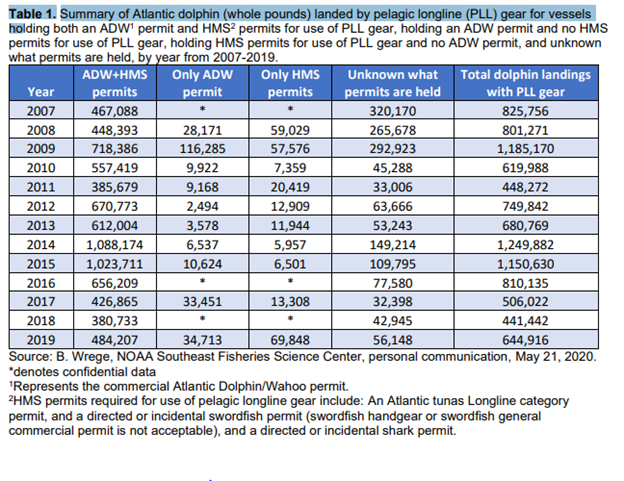